Of Maize and Men

Corn is more than a staple in Mexico. Iconic, emblematic and quintessentially Mexican, corn isn’t just the primary basis of daily meals. It’s a food that is alive with history and imbued with meaning.

Here, corn is “the food with which the gods chose to feed mankind." It is a symbol of Mexico itself.

Yet consumption trends, modern industrial farming practices and trade agreements have put the crop into peril by reducing market demand and consequently, income for farmers; and allowing the country’s many indigenous Mexican species of corn to fall into neglect.

However, many different groups - including some of the world’s best chefs - are making efforts to save the crop from disappearing and helping the country rekindle its heritage.

Corn was first domesticated around 8,500 years ago in Mesoamerica, the region extending from central Mexico through Belize, Guatemala, El Salvador, Honduras, Nicaragua, and northern Costa Rica. It’s hard to conceptualize just how long ago 8,500 years is, so here’s a fact that might help: it’s 1,500 years before the invention of the wheel.

“MAYAN LEGEND ATTRIBUTES THE CREATION OF MAN TO CORN”

Maize has played a critical role in the religion of all Mesoamerican cultures. From the Olmec, the oldest known complex civilization in Mexico, who built the incredible pyramids of Teotihuacan near Mexico City, to the Mexica (Aztec), Mesoamerica’s largest empire until the arrival of the Spanish, life was closely tied to the life cycle of corn.

It may seem surprising then, to learn that corn is an endangered species in a country which both birthed and reveres it.

“We have a corn crisis in Mexico,” says Rafael Mier. “You’d think we’d be spared from that given our culture and what the crop represents for us Mexicans. Well, things have changed and are changing fast.”

Mier is the founder of the Organización de Tortilla de Maíz Mexicana, an activist organization focused on educating Mexicans about tortillas and indigenous corn species. He hopes to help save the country’s heirloom corn varieties from extinction.

“Mexico is the birthplace of corn” he says. “it’s terrible to see an entire culture losing touch with its roots and forgetting seeds that have fed our ancestors for millennia, seeing them simply vanish.”

How has this situation come about?

It started in the late 1980s, when corn production began to be industrialized and centralized. Since the passage of the North American Free Trade Agreement (NAFTA) in 1994, corn has become something of a symbol of Mexico’s growing economic dependence on the USA. NAFTA made the United States’ low corn prices attractive, causing its yellow corn to enter the Mexican market for the first time.

Mexicans had never eaten yellow American corn before this agreement. Now, it makes up a third of the country’s overall corn supply. Although it’s used mostly as animal feed, it can be found in human food products as well.

As yellow corn became cheaper and more readily available than traditional Mexican varieties, many Mexican farmers have been forced to shift to subsistence farming or take up seasonal farming work far from their homes. Many others have left to find work in the United States.

Now, 59 varieties of heirloom corn that are native to Mexico are teetering on the verge of extinction, according to Mier, as are the many regional dishes they are part of.

Changes in the supply chain have made processed and prepackaged food cheaper and more convenient than ever, which is one of the reasons why the consumption of tortillas in Mexico is hitting a record low.

These days, most families rely on store-bought products to replace those that were traditionally made at home. This applies to the humble tortilla which is now likely to contain powdered mixes made with real corn but also with gums, colorants and preservatives and, in some cases, wheat flour.

The shift is also having an impact on health issues. Changing eating habits, including the substitution of traditional food and dishes with readily available junk food, and industrial food products, have contributed to Mexico now ranking among the highest in the world for obesity. Two-thirds of the population is classed as being severely overweight.

“Most of it comes down to education and the means to have access to better products and locally-produced goods” says Rafael Mier. 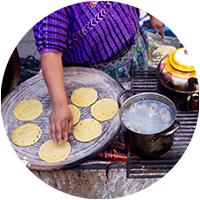 Maize is often cultivated as a cash crop, meaning that small-scale farmers need to be able to sell their production to live from it. If there is not a market for corn, then there is no point in cultivating it. In turn, this either forces a shift to subsistence agriculture – growing food for your own needs – or it negatively affects the resilience of the farmers and their communities by forcing growers to move elsewhere in search of jobs.

Organizations like IXIM, which means “corn” in the local indigenous Mayan language of Tzeltal, are working to save the heritage of corn.

Based in the southern state of Chiapas, IXIM is working with communities to help them become self-reliant, by growing and using indigenous species of corn rather than buying imported products. The organization also helps local farmers find buyers for their harvests, which supports resilience in local communities but also improves access to locally-produced crops for local families.

Others like NUUP - an association that works with farmers and promotes collaboration and transparency among different actors of the agri-food sector – link producers with small-scale farmers so that the producer gets a fair price for their harvest.

Other social businesses like Yolcan are working to place traditionally-farmed produce in over 20 of Mexico City’s most acclaimed restaurants, including Enrique Olvera’s Pujol, or Jorge Vallejo at Quintonil, - both of whom regularly make the list of the world’s best restaurants – and Eduardo Garcia’s Maximo Bistrot.

The company directly manages its own farmland and partners with local families to help distribute their goods. This simplifies the supply chain so that chefs can source some of the best products in the region from right on their doorsteps.

As activists throughout the country help farmers sell their harvests and citizens begin to grasp the gravity of the “corn crisis”, they are receiving welcome support from entrepreneurs and chefs both in Mexico and around the world.

A wave of popularity has propelled Mexican cuisine to gourmet heights in recent years. This surge of demand for high-quality, authentic Mexican food has driven a stronger demand for both authentic corn varieties as well as a higher volume of the staple, not just within Mexico but across the globe.

Mexican chefs, abroad and at home, are taking hold of this increased demand for Mexican food with its simple ingredients and complex flavors.

Its best ambassadors are world-renowned: Enrique Olvera and Jorge Vallejo in Mexico City, Martha Ortiz at Ella Canta in London, Carlos Gaytán in Chicago or Roberto Ruiz in Madrid. In Melbourne, Australia, lines stretch down the block outside Mamasita’s with hungry customers prepared to wait over two hours just for a coveted seating at the acclaimed taqueria.

Chefs and entrepreneurs in Mexico are teaming up with local organizations such as CIMMYT (International Maize and Wheat Improvement Center) to help support demand.

CIMMYT works with the Mexican government to increase corn productivity and provide assistance to smallholder farmers in rural communities. This helps to mitigate the country’s dependence on US corn and also preserves indigenous varieties.

A key element in this work involves restoring balance to the ecosystem while incentivizing farmers to produce landrace varieties. Landrace has a meaning that is similar to “heirloom”, but it goes one step further.

A landrace seed has been handed down for generations in one very particular area of the world. Landrace species thrive in the soil and local ecosystem that they “know” genetically – they’ll often fail if planted elsewhere. For example, landrace corn from Oaxaca will probably not thrive in Chiapas.

Landrace species and the unique attributes of each variety are what make Mexican maize so unique. They cannot be mass-produced anywhere else.

Other associations like the Colectivo Mexicano de Cocina are uniting chefs around common goals. Since 2011, the association has sought to share information, promote dialogue between professionals in the food industry and establish constructive links between chefs, producers and students.

Part of their raison d’être is to promote the use of landrace corn among their peers and to educate suppliers about the importance of keeping these varieties alive.

A literal return to roots: securing the future for Mexican corn 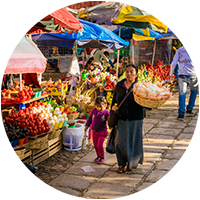 Pure economics might be the lifeline that landrace corn needs. Entrepreneurs see huge profits to be made from higher-margin tortillas or chips sold at restaurants around the world, purchased by consumers who are willing to pay higher prices for “gourmet corn”.

The positive effects of this additional demand are threefold:

Around the world, there is a strong push to reclaim heritage ingredients and dishes that may have fallen by the wayside in the industrialization of the food industry over the past 30 years.

As the principles espoused by “100-mile restaurants” and a return to local seasonality become more strongly embedded in the global food culture, farmers, businesses and consumers alike are pushing for greater respect in the human-food relationship.

The Mexican people are leading their food revolution, and reminding Mexicans that corn is the centerpiece of their culinary culture.

In the words of Rafael Mier and his countrymen, “Sin maíz, no hay país”.

Without corn, there is no country.