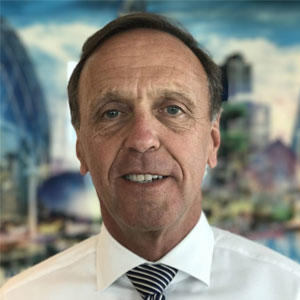 Mr. Peter Oosterveer is a Dutch national and holds a bachelor’s degree in Electrical Engineering from the Noordelijke Hogeschool Leeuwarden. In 1988, he joined Fluor Corporation as Controls System Engineer. Fluor Corporation is, with 60,000 employees, oneof the world’s largest publicly traded engineering, procurement, construction, maintenance and project management companies. Based out of the Netherlands, he was assigned to several international projects, followed by general management roles. In 1999, Mr.Oosterveer moved to Fluor’s headquarters in California to run a major global change program. After the successful delivery of this program, he moved back to Europe to take the role of General Manager for Fluor in The Netherlands, and subsequently leading the Chemicals Group for Fluor Europe, Africa, and the Middle East. Having grown the Global Chemicals business, Mr. Oosterveer became President of the Energy and Chemicals group for Fluor globally and became a member of the Fluor Corporate Leadership Team.

In 2014, he was appointed as Chief Operating Officer with Profit & Loss responsibility for the Commercial Operations of Fluor worldwide, responsible for approximately $ 20 billion of annual revenues. Mr. Oosterveer has extensive knowledge and experience as a leader in the global engineering industry. He possesses deep knowledge of project management, strong commercial acumen, and a demonstrated ability to deliver profitable and sustainable growth.

Since April 2017 Mr. Oosterveer is CEO and chairman of the Arcadis Executive Board. After joining, he focused on developing the company's strategy which is entitled Creating a Sustainable Future and was launched in November 2017. The strategy has three pillars, People & Culture, Innovation & Growth, and Focus & Performance and includes a strong sustainability component directed at delivering a substantial contribution to the UN Sustainable Development Goals. Following the strategy launch, Mr. Oosterveer proceeded to adjust the management structure of Arcadis to align it with the strategy, leading to a reduction in size of the Executive Board (now to include only CEO and CFO) and the installation of an Executive Leadership Team which is accountable for strategy execution and company performance. In 2018, this team under Mr. Oosterveer’s guidance selected the key priorities aimed at structurally improving Arcadis’ performance and readying the company for future market developments among other areas in the digital space.