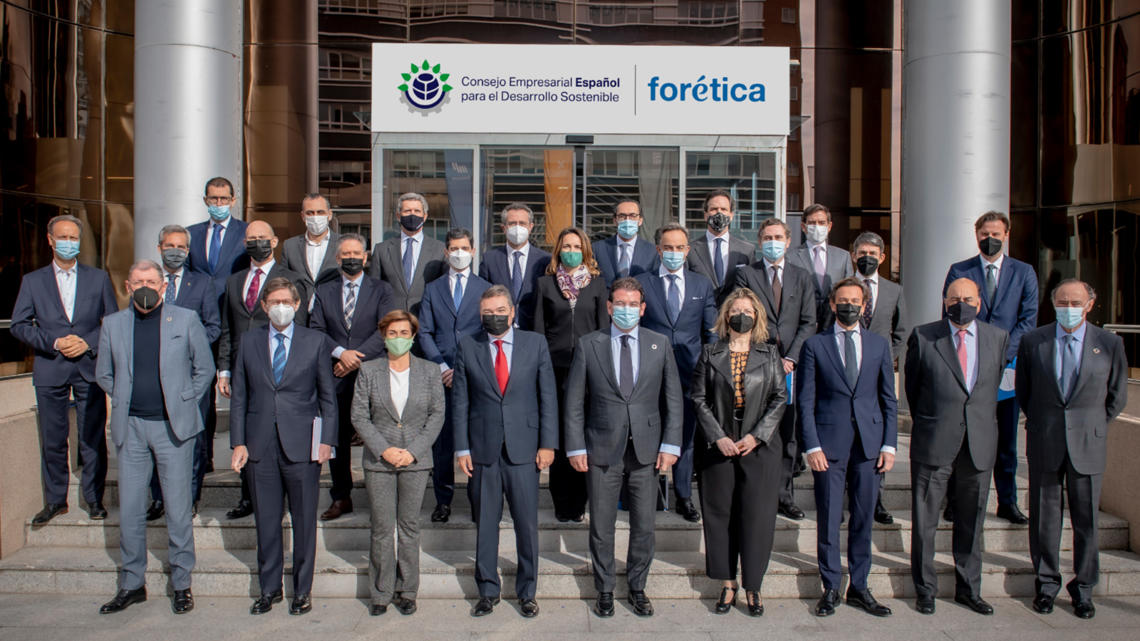 Madrid, 24 February 2022: The Spanish Business Council for Sustainable Development, a high-level body made up of 40 Presidents and CEOs of major companies and led by Forética -the leading business organization for sustainability in Spain, representing the country on the World Business Council for Sustainable Development (WBCSD), presents the roadmap ‘Vision 2050. The moment of transformation’ with the aim of inspiring and accelerating the practical response by Spanish companies to the major environmental, social and governance (ESG) challenges we face.

Within the context of this meeting, the Council presented the roadmap ‘Vision 2050. The moment of transformation’, offering a practical vision through the inclusion of a ‘CEO Toolkit’, and placing the global vision presented by WBCSD in the practical business context in Spain. This roadmap aims to guide companies in developing the actions to steer the systemic transformations needed so as to realise the shared vision of a world in which more than 9 billion people are able to live in dignity, within planetary boundaries.

In the words of Raúl Grijalba, President of Forética and of ManpowerGroup Spain, Portugal, Greece and Israel: “Our companies are facing a key stage in the so-called ‘Decade of Action’ in response to unprecedented challenges, in particular the climate emergency, loss of biodiversity and growing inequalities. It is in this context that the Spanish Business Council for Sustainable Development takes on its role in voicing a sustainable business leadership message, as a beacon to help and guide other corporations, as well as the country’s own public institutions, on the path to future sustainability, with roadmaps such as the ‘Vision 2050’ which we present today. A forum on which to share trends, challenges and solutions; a place where we welcome listening and partnerships with governments, companies and society as a whole, with the goal of acting faster, together, to lead these critical transformations by 2050”.

For his part, Germán Granda, Managing Director of Forética, adds: “The ‘Vision 2050’ presented by the Council is a strategic yet ambitious guide that offers leaders of governments, businesses and civil society a comprehensive overview and common understanding of how and where to direct their actions so as to contribute to sustainable reconstruction. It identifies nine priority systems for transformation: Energy, Transportation & Mobility, Living Spaces, Products & Materials, Financial Products & Services, Connectivity, Health & Wellbeing, Water & Sanitation and Food. The partnership created with the Council also allows the adoption of ambitious sustainability goals as an opportunity to generate jobs, wellbeing and a concrete contribution to society and the planet”.

The second executive meeting of the Council was inaugurated by Spain's Third Deputy Prime Minister and Minister for Ecological Transition and Demographic Challenge, Teresa Ribera, against the backdrop of Forética's collaboration with the PM's office in structuring ‘Spain 2050’, a long-term national vision that takes on board many of the challenges and commitments of ‘Vision 2050’.

The event was also attended by Chair of WBCSD's Executive Committee President and CEO of Solvay, Ilham Kadri, who provided the global perspective on ‘Vision 2050’. As this roadmap highlights, systemic transformations will only be successfully achieved through three critical changes in the strategic business mindset: the reinvention of capitalism, through long-term, inclusive and sustainable value creation, building long-term resilience that enables companies to adapt to forthcoming disruptions, and a regenerative approach that helps restore and nurture the social and environmental systems on which business depends.

Boosting business leadership in the field of sustainable development

The Spanish Business Council for Sustainable Development is the high-level business forum on which the most senior representatives of companies generate a joint strategic response to raise the bar and underpin action in response to ESG challenges.

In specific terms, the Spanish Business Council for Sustainable Development is made up of the most senior representatives of Forética's 40 corporate sponsors:

The Secretariat of the Spanish Business Council for Sustainable Development is run by Germán Granda, Managing Director of Forética, the organisation which heads this Council.

You can download the document ‘Vision 2050. The moment of transformation’ here