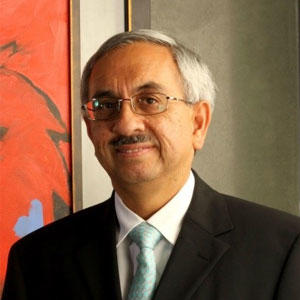 Mr. Nadir B. Godrej is the Managing Director of Godrej Industries Ltd. and the Chairman of Godrej Agrovet Ltd. He is also the Co-Chair of Godrej Good & Green Governing Council. He holds a Master of Science degree in chemical engineering from Standford University and an MBA from Harvard Business School. He has been a Director of several Godrej companies since 1977 and has developed the animal feed, agricultural inputs and chemicals businesses of Godrej Industries and other associated companies, and has been very active in research.

Mr. Godrej is deeply committed to the GOOD and GREEN strategies and achievement of set targets for the Godrej Group. He encourages and supports a shared vision value for all programs of Good and Green.

Mr. Godrej is the President of the Alliance Francaise De Bombay. And also a Member of the CII National Council.

Recently, the Board of Management of Manav Rachna University has unanimously conferred Mr. Godrej with an Honorary Degree of Doctor of Philosophy. And few months ago, he has been inducted as Fellow of Indian National Academy of Engineering (INAE).

Science, linguistics, swimming and poetry; author of "Life and Other Poems" & "Nadir Godrej The Poet", a collection of English and French poems; three sons, ages 25, 23 and 21.