Fixing our food system as a cure for our planet

For those familiar with planetary boundaries, you’ll recall that they define a ‘safe operating space’ where our civilizations have flourished and thrived for the past 10,000 years without harming the Earth natural systems (a geological period called Holocene). If you need a refresh and a clear explanation, watch Johan Rockström’s 2010 TED Talk. Today, the melting of Greenland and Antarctic ice shelves or the bleaching of the Great Barrier Reef raise the question of the edges of the "safe operating space", a "zone of uncertainty". Entering this zone, Earth systems would start changing dramatically, and systems would pass a ‘tipping point’ where some changes could be irreversible.

More dramatically, each Earth system interacts with one another. For instance, changes in land systems, for which the boundary has entered into the “zone of uncertainty”, have a major impact on climate, biodiversity, soil fertility, and biochemical cycles. This last cycle has also a strong impact on biodiversity; and losses in biodiversity weaken the productivity of land systems, which further yield in land system changes. These interactions nurture the loop cycles damaging Earth systems.

The most striking result of Steven Lade and colleagues’ article on Earth systems interactions is their illustration on the effects of interactions between the planetary boundaries and the shape of the "safe operating space". In a nutshell, the interactions between systems can be summarized with two axes. The first accounts for the direct impact of greenhouse gas (GHG) emissions which principally act on climate change and ocean acidification. The second accounts for the direct and parallel terrestrial impacts of agriculture such as land use changes, nitrogen and phosphorous flows, and freshwater use. The green region defines the safe operating space; the yellow region is where at least one earth system is beyond its planetary boundary; the red region is where at least one Earth system is beyond its zone of uncertainty. The small circle indicates the current state of direct impacts on these planetary boundaries as estimated by their model. The arrows and shadings indicate the modeled trajectories following global-scale transitions to low-meat diets and bioenergy production with carbon capture and storage (BECCS). 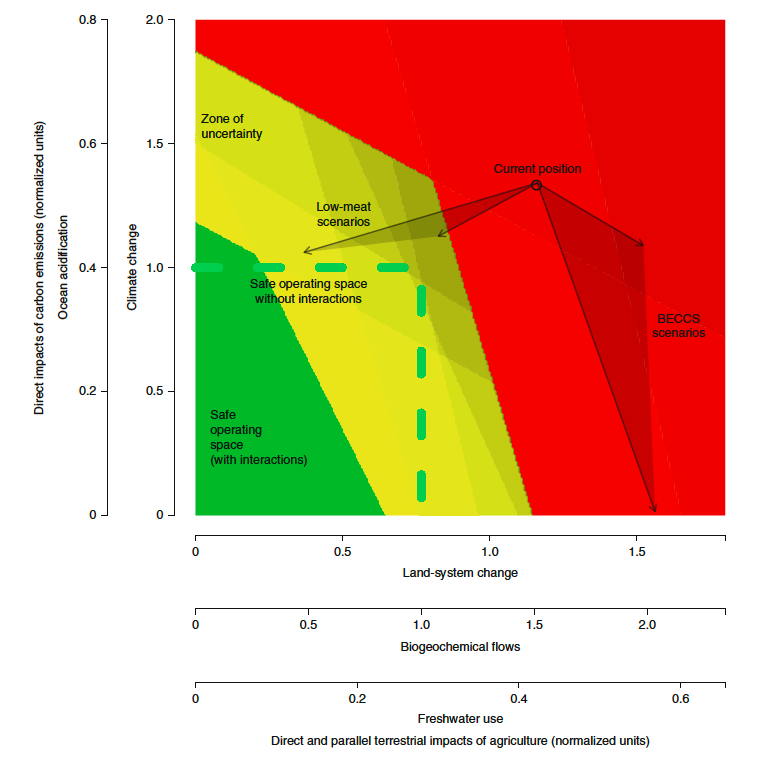 Considering the interactions between Earth systems, two main observations can be made. First, the “safe operating space” is smaller than initially thought. The large green rectangle shrinks to a mere green triangle. This is not only as if we were swept away on “The Raft of the Medusa”, but as if the island we wanted to retrieve had become smaller. Second and most importantly, fixing the food system could be the most effective pathway to navigate the planet to or close to a safe operating space. Keep in mind the raft.

To navigate closer to a safe operating space, the focus should not be on solutions to only mitigate GHG emissions. In fact, these would bring us away from a “safe operating space”. On the contrary, aiming for a more sustainable food system we help us reach firm ground.

“Fixing our food system” has been the mission of our FReSH project since its launch in 2017. Amongst the debates we have had over the years with our members and partners, proteins have been at the heart of the debate. This is firstly because proteins are the food element that impacts the environment most per calorie of food produced. It is also because any discussion on proteins between business, scientists and civil society, tends to end up with entrenched positions. With on the one hand those for whom the transition called upon by groups such as EAT, moving from animal to plant-based proteins, is felt as a threat to livestock farmers, meat-eaters and subsequently their business; and on the other hand those who see a massive opportunity to develop a new business around plant-based or other (e.g. insects, algae) novel proteins.

As I wrote here a few months ago, “science and business must work closely together as partners on our environmental challenges”. Hence, the FReSH project partnered with science partners (EAT and FABLE) and combined their modeling with quantified industry insights to develop a protein pathways white paper that was launched at the World Economic Forum Annual Meeting in Davos in January 2020 to guide the transformation of the protein sector.

This white paper identifies the most promising solution spaces for the proteins sector, and beyond, for the entire food system. These would significantly help reduce GHG emissions as well as nature degradation. And even, go further than today’s commonly agreed 2030 “apex targets” for climate and nature.

The figures show the potential impact of those business solution spaces, with potential to: 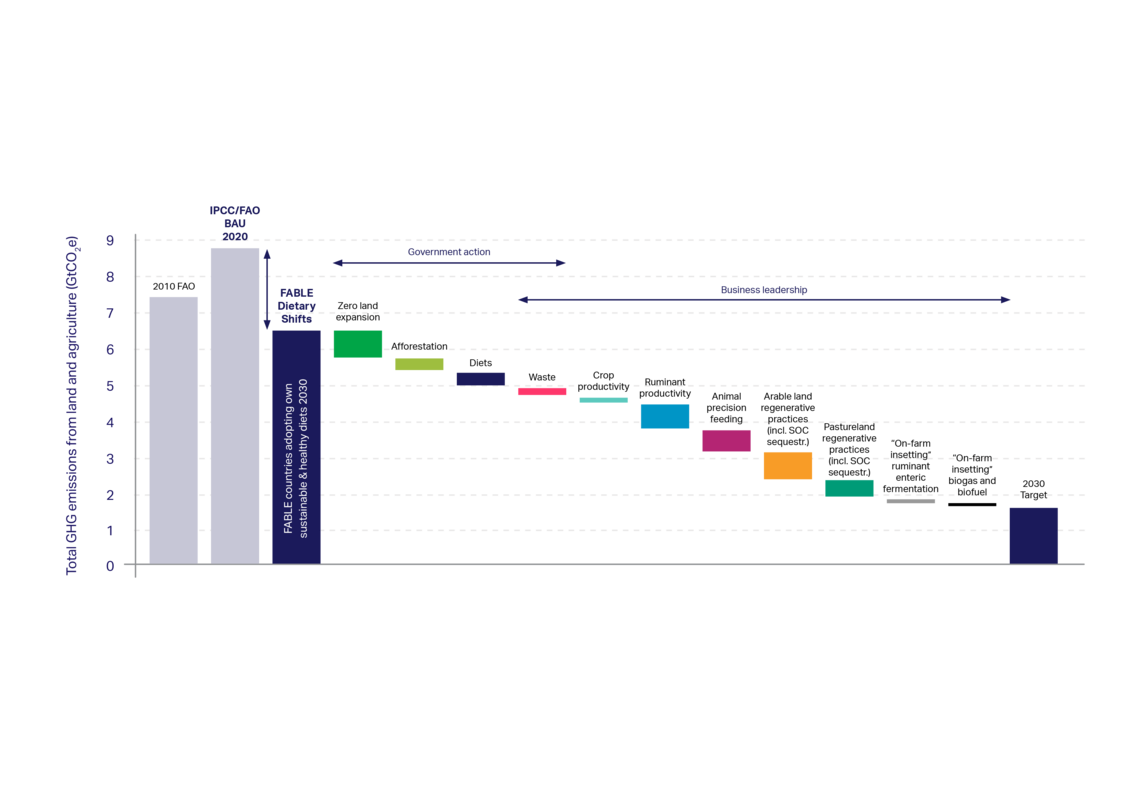 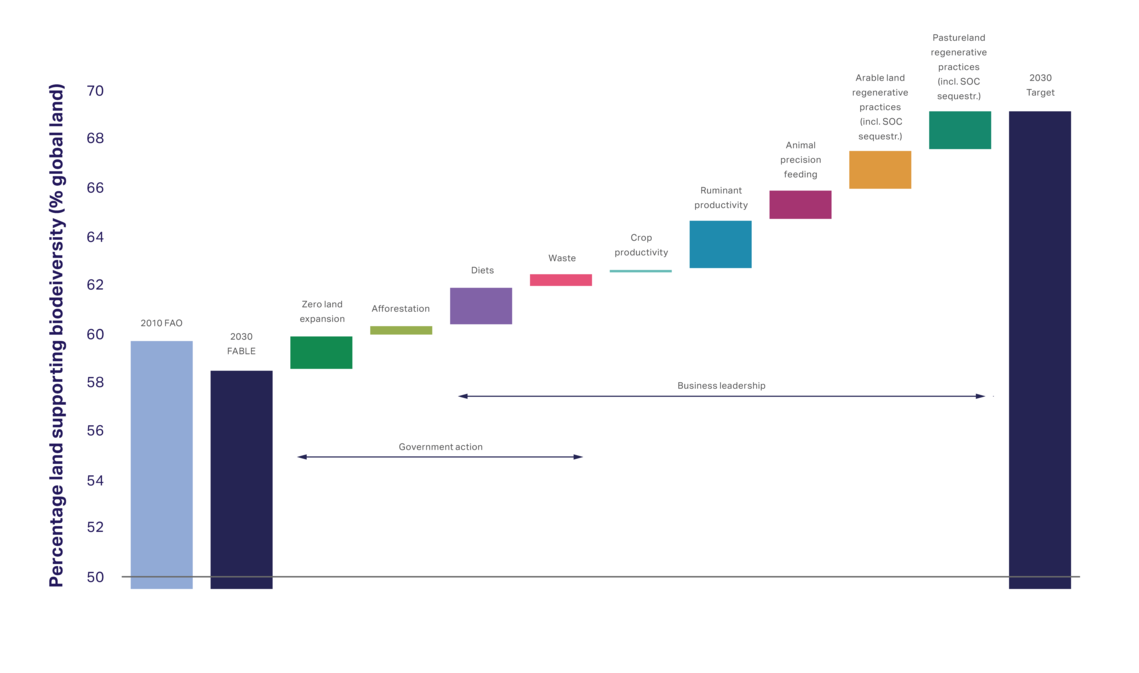 Furthermore, this table lists the most significant solution spaces for business and their potential for reducing the sector’s GHG emissions and increasing the land area that could support biodiversity conservation. 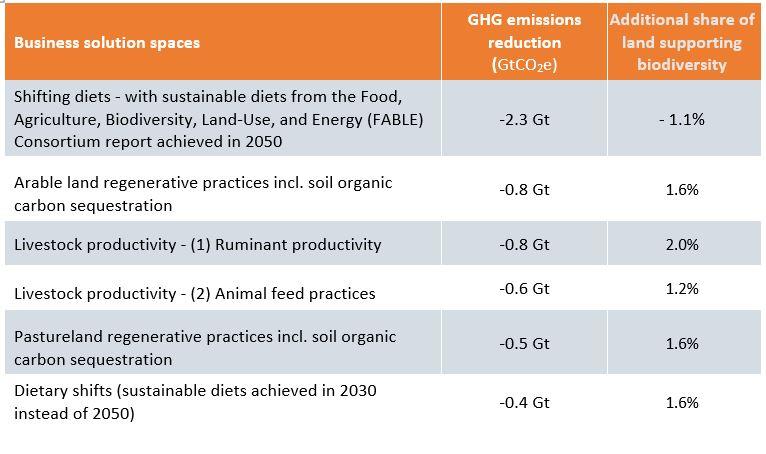 In parallel with our protein pathways white paper, we also launched a report on plant protein that explores and shares the best solutions to scale-up a diverse variety of plant proteins globally, promoting a sustainable and healthy balance of plant and animal proteins. Rebalancing protein intake by adding more plant-based foods – especially in countries dominated by Western diets – can reduce GHG emissions, the amount of land required for agriculture, natural resource consumption, chemical input use and biodiversity loss. As consumers are becoming more aware of the environmental and nutritious benefits of shifting to a more plant-protein based diets, a growing number of businesses are responding to this through the promotion of an integrated protein strategy to market healthy and sustainable plant-based proteins products.

Looking back at both publications, it is striking to see that the main levers to reduce GHG emissions and increase biodiversity are spread across changes in production and consumption of plant and animal proteins, whereas most attention seems to be focused on consumption (demonstrated by our recent panel at GreenBiz). As rightly noted by Jack Kittinger, senior director of practice at Conservation International, during this panel: "At the end of the day, it comes down to sustainable production practices; the idea that the changing consumer demographics of Gen Z are going to be fast enough and that consumer education and advocacy is going to be enough at the end of that supply change and somehow trickle all the way down to the field, farm or ocean, is a fundamentally false thesis."

So, what’s next? WBCSD’s Food & Agriculture program area, through its FReSH and new Scaling Positive Agriculture projects, is now using the impact assessment of the above business spaces to prioritize collective action with our members, on and beyond proteins.

But there is more. Have you noticed that you’ve made it to the end of this piece without reading the word “COVID-19”? Here it comes: the ongoing pandemic is a strong and dramatic evidence that we have definitely entered the ‘red zone’ described above, that goes beyond several tipping points and has never been experienced by humans for the past 10,000 years. And it’s striking to note that, already four years ago, UNEP Frontiers 2016 report warned that 51% of the emerging diseases in the past 75 years were related to land use, food and agriculture industries changes, and that the risk of losing the nature buffer zone between pathogens reservoirs and humans most often is caused by deforestation for agriculture and urban sprawling.

Hence fixing our food system may be “the most effective” cure for our planet and prevention for future global disruptions!