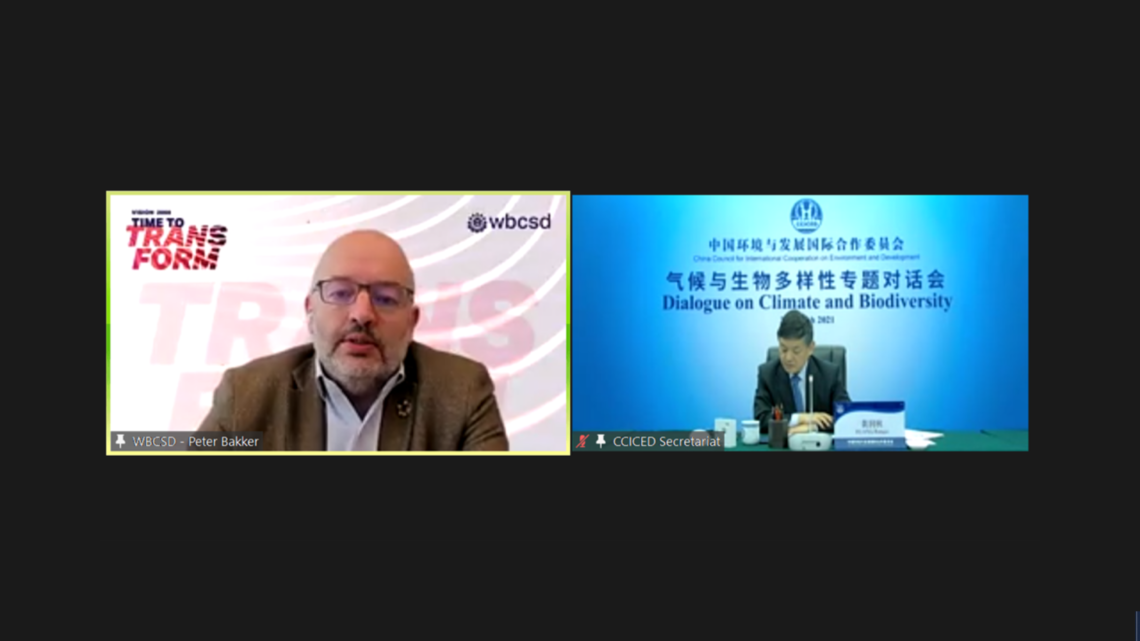 Beijing, 6 April 2021: WBCSD President & CEO Peter Bakker, in his capacity of Advisory Board Member of the China Council for International Cooperation on Environment and Development (CCICED), participated in a dialogue on climate and biodiversity in China. The virtual conference was attended by over 70 representatives of CCICED partners.

Huang Runqiu, China’s Minister of Ecology and Environment and Chinese Executive Vice-Chairperson of the CCICED, presided over the meeting and delivered a speech. Minister Huang highlighted the Chinese government’s focus on addressing climate change and biodiversity conservation. In September 2020, Chinese President Xi Jinping announced that China aims to have CO2 emissions peak before 2030 and achieve carbon neutrality before 2060, a climate commitment marking a historic precedent.

Minister Huang stressed that a profound transformation of the social and economic systems is needed to realize these ambitious targets. He added that China has integrated the promotion of high-quality development with its efforts to peak carbon dioxide emissions and achieve carbon neutrality, has made coordinated efforts to reduce pollution and carbon emissions, and has strengthened measures to deal with climate change and protect the environment.

China has formulated an action plan for peaking carbon dioxide emissions before 2030 and accelerating the development of the carbon emissions trading system. It was stated in the discussions that for China, biodiversity conservation is not only a foundation but also an objective and measure to achieve sustainable development. The 15th Conference of the Parties to the Convention on Biological Diversity (CBD COP15) will be held in Kunming, in China's Yunnan Province this October. As the host country, China will work to elevate global biodiversity management to new heights.

In his speech, Peter Bakker first noted that to avoid dangerous, irreversible climate change, we must reach net-zero emissions before 2050 and become nature-positive by 2030. The longer we delay action at the pace and scale needed, the more complex and costly the impacts become to mitigate and adapt to, with disastrous effects on people and planet. He then noted China’s recent climate actions, including the climate commitments in October 2020 and China’s 14th Five-Year Plan, as steps in the right direction with a focus on the energy transition, a new type of sustainable urban development and green investment priorities.

Peter Bakker expressed the importance of green recovery to drive development and enhance global cooperation on ecological and environmental protection along the Belt and Road Initiative (BRI). In his role of Convener of the Belt and Road Initiative International Green Development Coalition (BRIGC), he stated: “China can play a pivotal role in shifting the global energy system, at home and abroad, leading the transition to carbon-free economy, with the Belt and Road Initiative.” He also introduced the Vision 2050: Time to Transform report recently launched by WBCSD and its implications for China, stating that the world needs a long-term vision of 9+ billion people living well, within planetary boundaries, by mid-century that we can all rally behind. Finally, Peter Bakker concluded that in China and around the world, business must play a leading role in the transformations toward the common vision for 2050, working together with governments, regulators, investors and all people.

Other remarks came from CCICED members and advisors including:

The CCICED was founded in 1992 as a high-level international advisory body with the approval of the Government of China. It plays a unique role in championing sustainable development in China and in building a bridge between China and the international community on environment and development.