Cape Town moves away from the precipice of Zero Water

This proverb certainly holds true for many cities around the world. There is a global water crisis, with almost half the global population already living under the threat of water scarcity for at least one month each year. By 2025 an estimated 1.8 billion people will live in areas that are continuously plagued by water scarcity. Sustainable Development Goal (SDG) 6 highlights the urgency and importance of managing water responsibly. In regions where water is abundant, it is often difficult to appreciate what it means when this resource is no longer available.

Water scarcity, poor water quality and inadequate sanitation negatively impact food security and quality of life. Drought afflicts some of the world’s poorest countries, worsening hunger and malnutrition. According to the United Nations, by 2030 water demand could outstrip supply by 40%.

It is a scary thought that a large part of the world’s population spend up to three hours a day collecting the water they need to survive, while often suffering from the debilitating consequences of that same water’s poor quality. The residents of Cape Town are quickly learning that water is the most precious resource of all.

A closer look at the water crisis in Cape Town, South Africa

The Western Cape and specifically Cape Town is in its third year of unprecedented drought and is currently undergoing severe water shortages. There are six reservoirs from which Cape Town and its four million inhabitants draw the approximately 300 million cubic meters of water that the city uses each year. This represents around 60% of the total amount of water stored in these reservoirs. A further 30% is used by agriculture, and the rest by neighboring municipalities. As of 11 May, the six reservoirs share a combined capacity of 21.3% - leaving Capetonians with only 11.3% usable water. 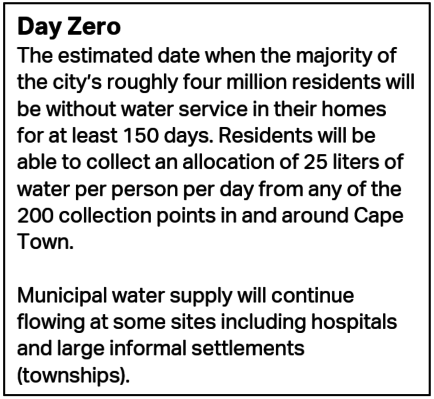 As a result, Capetonians have been living on a daily allowance of 50 liters of water per day since 1 February 2018 to avoid reaching a ‘Day Zero’ scenario. This is the minimum amount needed to meet basic human needs, as stated by the WHO. Put into perspective, an average American consumes 446 liters of water per day. Though many citizens may feel like they are already living Day Zero, the city believes that they have narrowly escaped and have pushed back the estimated arrival of Day Zero to 2019. This hasn’t stopped many residents from queuing regularly at natural springs to collect water to take home and use for washing and cooking. Amongst the residents, it has become a point of contention to have a green garden or clean car, with many boasting about how quickly they can shower or how many times they flush the loo.

The severity of the water crisis is being felt by citizens through water price increases of 195-700%, fines, limitations on borehole use and limitations on the number of bottles of water being bought per person in shops. To put the price increase into perspective, using an official document released by the city’s Department of Water and Sanitation, a typical household made up of four occupants using 10.5 kiloliters (Kl) of water per month as of 1 February 2018 pays R114 (US$9.31) as opposed to R25.97 (US$2.12) in 2017. 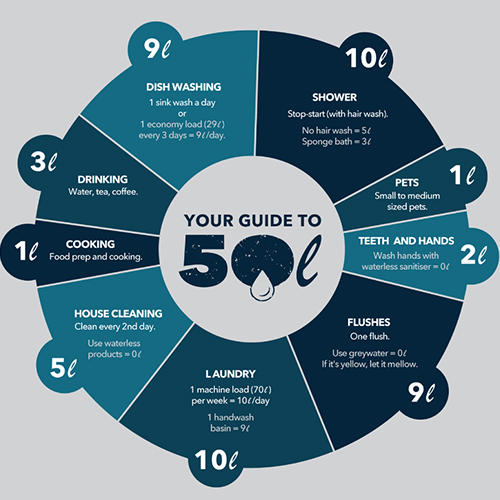 A how-to-guide released to Capetonians about how to distribute their 50 liters water ration a day.

Many fault the municipality for not putting more investment into appropriate infrastructure. In 1990, the city was warned that they would “run out of water in 17 years.” At the time a Water Research Commission presentation in the country’s Parliament recommended a sewage-recycling plant to augment supplies from the city’s six rainfall-fed dams. While Cape Town embarked on a laudable conservation effort, we can see from today’s dire situation that it wasn’t enough.

Professor Neil Armitage, Head of the Department of Urban Water Management at the University of Cape Town (UCT), recently highlighted the fact that the City of Cape Town has managed to keep water demand to 1999 levels. This is a huge success story, given that Cape Town’s population has grown by more than 50% in the same period. City water engineers have achieved this by improving efficiency in the water system, which boasts just a 15% loss of water through leaks and unaccounted for demands. This return is among the best in the world, with South Africa’s national average standing at 36%. Armitage also shares the fact that informal settlements are consuming just 4.7% of municipal water, compared to 66% by formal residential areas.

What is being done while citizens suffer the consequences?

Moody’s Investors Service has released a report stating that Cape Town’s water crisis poses a possible threat to social order and anticipates that two of Cape Town’s main economic sectors - tourism and agriculture - are likely to decline due to the crisis. This would mean job losses and also a loss of tax-income for the city.

Moody’s points out that, for now, the city is employing two main tactics to alleviate the crisis – demand management and supply augmentation. There are currently seven augmentation projects underway, though all except one are running behind schedule. There are, however, said to be a further 12 projects that are in their late stage of planning and are ready to proceed if required. This may sound like Cape Town has a safety net. However, Professor Armitage warns that “large infrastructure projects will take years to complete so, in the short-term, if we want to manage this water crisis wisely, we are going to have to make the change ourselves and just use less water.”

In the meantime, residents have been queuing at natural streams to fill up 25 liter containers with water, with violence breaking out amid increasing frustration.

Business has also been affected by the crisis

Over the last three years, water crises have consistently been ranked as one of the top business risks in terms of likelihood by the World Economic Forum. Business is a clear recipient of the risk posed by water scarcity as outlined in the WBCSD CEO Guide to Water. A report released by PwC claims that businesses within the Western Cape now understand the impacts of water scarcity and this threat has subsequently jumped to the top of their risk registries. A number of businesses are already putting preventive measures and crisis management plans in place to deal with the expected water disruptions.

The same report highlights the fact that water scarcity will not only impact organizations that are reliant on large volumes of water for their core operations - such as agriculture, food processing and manufacturing businesses - it will also have a significant impact on corporate offices.

Electricity company Eskom, a WBCSD member, recognizing the risks of water scarcity for its operations, has started taking measures to reduce the risk while at the same time alleviating pressure from the municipality for water. Eskom has done this by implementing a new desalination plant at the Koeberg nuclear power station to meet its own potable water needs. Even though the plant uses sea-water to cool the reactors, it can only run for two weeks without off-site potable water. The desalination facility (even though extremely energy intensive) is therefore critical for Eskom’s Keoberg facility to maintain its own operations, thereby ensuring the city gets its supply of electricity. This way Eskom has also managed to reduce its burden of potable water (approx. 1,370 Kl per day) on the city municipality which equates to 11,000 houses receiving potable water for a month.

The construction industry in the Western Cape provides another good example of how water scarcity presents risk. Some building projects have had to rely on expensive imported water with others postponing indefinitely because of shortages — in a region where one in 10 jobs are in construction.

The Rabie Group, a large construction company, uses treated effluent water to make concrete and wash equipment on its Cape Town sites. Miguel Rodrigues, a Rabie Director, has previously stated that "these factors all have a price tag, which will invariably push up construction prices." However, there are other opportunities surrounding circular water management for industries, such as recycling its own discharge back into its operations, supplying its treated discharge to agriculture for re-use and so on.

Lessons for the world from Cape Town 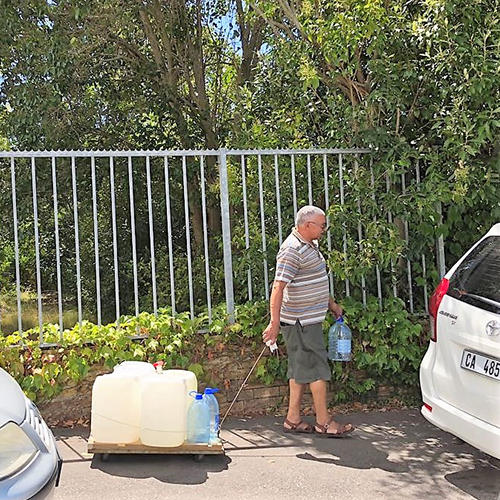 Cape Town may have been the first major city to nearly run out of water, but it won’t be the last. Mexico City has already had to implement cuts to residents’ piped water supply. Officials in Melbourne have warned that the city is little more than a decade away from exhausting current water supplies. In recent history São Paulo was down to less than 20 days’ worth of water, according to the World Resources Institute. Other major cities nearing crisis include the likes of Bangalore, Beijing and Cairo.

Tactics used by the city of Cape Town to reduce water use by civilians bring two interesting insights. The first is that providing warnings and nudging people to use less water works better with middle to low-income households. The second insight is the fact that the most effective means of curbing high-income households comes from naming and shaming the highest water users.

While recognizing that infrastructure fixes cannot be done overnight, the importance of long-term investments and maintenance of infrastructure for addressing water management issues in connection with climate change cannot be underscored. Why were Cape Town’s dam levels so low in the first place?

Business needs to recognize the potential impact of water scarcity, as well as foresee future water risks and build up resilience by preparing a water management strategy. PwC outlines a robust strategy to include a combination of risk management and business continuity management principles aimed at coping with the expected water crisis and ensuring continuity of operations. WBCSD together with its member companies have also produced:

Following centuries of misuse, we must all come around to the fact that water is not an infinite resource. Authorities need to build resilient water management systems that can support cities water needs when going through drought. Business needs to recognize the potential impact of water scarcity and build up a resilience by preparing a water scarcity management strategy. Lastly, all of us must change our behaviour when it comes to water usage – or ‘Day Zero’ will become something that we all have to live with. Let’s not allow our countries wells to dry to know the worth of water. We can learn and take action now.